Taking place years upon years after Dragon Sinker, a new world has emerged, and is under siege when a dark dragon awakens and goes on a rampage. It’s up to a new hero and a dragon of light to go around the world and stop the evil once and for all!

While Dragon Sinker went for a more simplistic, to-the-point story akin of old school RPGs, Dragon Lapis is a bit more wordy, kinda like Exe’s other RPG games. Yet, it has a lot of nods to the original Dragon Sinker without making it impossible to understand if you skip over that title.

If you saw what Dragon Sinker looked like, then Dragon Lapis will look very similar, in both presentation and style, although there are still slight upgrades to differentiate the two. Continuing the 8-bit look and feel from Sinker, the games look very identical, although the overworld sprites now have some slight extra detail to them, with some more colors available and extra shading here and there. Otherwise, Lapis continues the tradition of being a pretty 8-bit RPG throwback with catchy and simple music.

Just like Sinker and most other EXE Create RPGs, Dragon Lapis is a simplistic point A to B RPG, where you must guide the party to the next destination, while completing quests, defeating enemies and bosses, and making it to the next objective.

Being a sequel to Dragon Sinker, the battle system is pretty much identical, with the same nature of picking skills and attacks to battle, with an autobattle option to speed the flow of turns up: basically, anything I said about Sinker’s battle system, will mostly apply here in Lapis, meaning that it’s quick, fun, and the battles don’t take too terribly long, being the perfect length.

However, Lapis offers a new twist in how you learn skills, for you learn them here by picking a job of your choice. These jobs are earned through growth plates, which can be found all across the world and be completed by spending EP points on them to unlock their benefits. Ranging from stat boosts, new skills, and upgrades of skills, these can unlock all sorts of extra things, and are pretty addicting to go after, offering a means to at least make the game more customizable than these RPGs usually are. 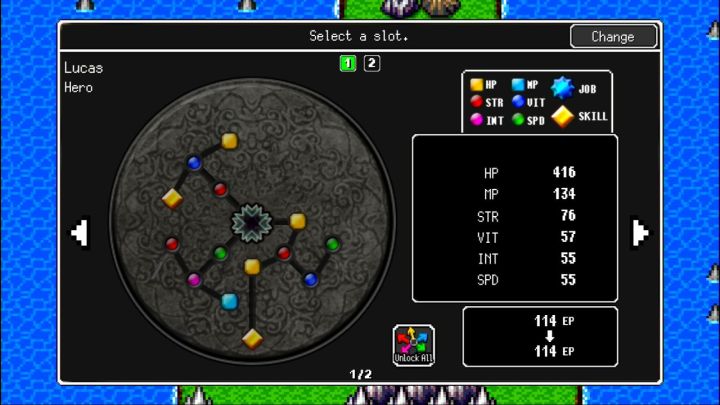 Besides that, it’s the same good flow as Dragon Sinker, albeit a lot more wordy with the plot. Still, it’s interesting enough to keep you going, and like Sinker, the simplicity works here way better than in EXE’s 16-bit offerings. Unfortunately, the common gripe I also have with recent Kemco RPGs persists here, since the options to disable random encounters, increase damage and other such things are locked behind DLC paywalls, when earlier Kemco RPGS had some of these options available with the game itself. Thankfully the game as-is is how it was intended, so it’s very playable and enjoyable regardless, but it still sucks that QOL features and accessibility options are still behind DLC, when there’s little reason for them to be on console.

In conclusion, Dragon Lapis does a great job at hitting that same sweet spot that Dragon Sinker did. The 8-Bit sprite art fits this world just as well as in that game, the combat is still enjoyable, and now with the addition of classes and skill wheels, it manages to keep everything that make Sinker great while trying new things that don’t mess stuff up.

Considering how samey looking a lot of the 16-bit attempts EXE Create have been lately, I honestly am quite surprised they don’t do more 8-bit throwbacks like this game: they’re easily EXE’s best works to date, and Lapis being so much fun while refining the original game just makes that more evident. While EXE Create may be interested in making endless sequels to the Asdivine series lately, I do hope they consider revisiting the world of Dragon Sinker and Lapis, for these two games are both great, and Lapis here is a Kemco RPG I can actually strongly recommend you give a go, if you enjoy simplified RPG adventures.

I give Dragon Lapis an 8 out of 10, and you can check out the eShop page here.