Thanks to Yacht Club Games for the review code

In a city of ruin, a Ninja awakens and finds that he’s the last of his clan with the capability to fight, and must set out to save those he can and defeat the evil controlling the city with darkness! Filled with plenty of cinema scenes harkening back to the era of 8-bit Ninja Gaiden, Cyber Shadow contains a narrative not too complicated to understand, yet very compelling and perfectly taking advantage of the game’s nature.

Being another NES throwback, Cyber Shadow has a lot to live up to: not only have there been some really darn good hardware-accurate tributes in the form of games like Retro City Rampage, but there have been games that simply imitate the style while keeping everything that made the NES era great while removing the frustrating bits.

Thankfully, Cyber Shadow mostly falls into the latter, with NES inspired presentation that, while not 1:1 with the NES and definitely not capable of running on that system as-is, was certainly made by people that knew their homework. Beautifully animated 8-bit sprites populate the game, with satisfying animations, gorgeous backgrounds, and pleasing colors that bring to mind Natsume-Atari action games such as Shadow of the Ninja and Shatterhand. Combine that with great 8-bit cinema scenes paying tribute to Tecmo’s Ninja Gaiden trilogy, and you have what looks like the ultimate throwback to the 8-bit fast action game.

And not only does Cyber Shadow look excellent: it sounds excellent too, with a soundtrack that has to be heard to be believed, with energetic tracks that will stick in your head for days, and tons upon tons of songs that could each serve as a modern retro masterpiece. If you liked the intensity of Sunsoft/Konami music from back in the day, but wanted the ante upped even more, then Cyber Shadow’s godlike OST is absolutely going to energize you during the adventure, and is so good that I honestly hope a Vinyl release launches as soon as possible solely so this godly score can spin on my turntable time and time again. It’s truly a magnificent soundtrack that I had little expectations for until I started to play; then I was captivated.

Cyber Shadow is a stage by stage action game, not unlike the many other NES action games such as the ones I noted above, where the main objective is to reach the end of each stage, defeat a boss and a miniboss, and then get an upgrade to move onto the next area. This repeats for a good chunk of the game, until you obtain all of your equipment, which leads to the game focusing more on surviving to the end of the stage and making the most of your abilities.

Controls are fairly simple, with your standard attack and jump, and over the course of the game, you gain upgrades such as extra weapons, sword attacks, and a handy dash attack, and even with these increasing upgrades, the controls still stick to the same simplicity, meaning that the game is just as easy to adapt with as a classic NES game. 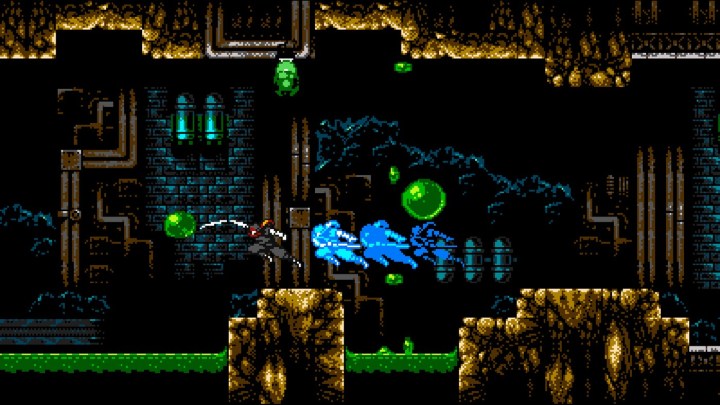 Each level contains a lot of very well-designed action, with an assortment of enemies, platforming challenges, and secrets to enjoy, and they always feel just the right length, despite being a lot longer than your average 8-bit levels. In fact, you can eventually warp back to older stages and use newer upgrades to find health and SP boosts, adding a bit of a light metroidvania element to the mix. Oddly, I didn’t really have much problems with the length of these stages, mainly due to how you don’t actually have lives in Cyber Shadow, as death kicks you back to the last checkpoint, again and again, with the only penalty coming from having to backtrack to where you died. These also serve as save points, so you can quit out of the game and resume right where you left off with ease. 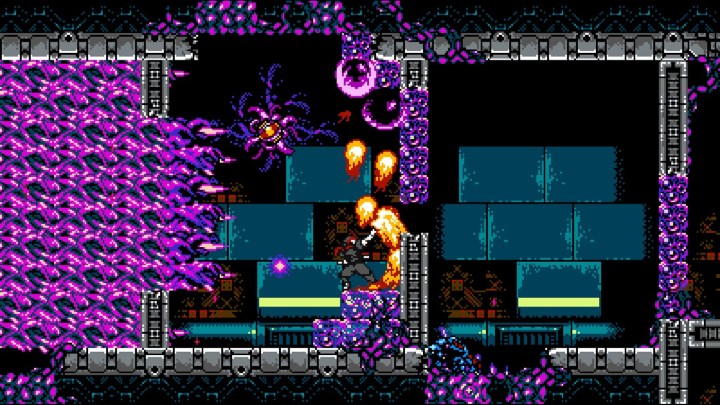 Don’t be fooled by the generous saves and infinite retries though, for Cyber Shadow is still a brutally challenging action game not unlike its inspirations: and that’s a very good thing! Each stage is carefully crafted to be a gauntlet of challenges to conquer, and reaching each checkpoint feels like a satisfying mini-victory worth celebration. The bosses are equally as challenging, and if you’re going after the achievements, some of them will put your skills to the absolute limits as you try to clear them in certain ways, whether that requires speedrunning a boss fight, defeating one without any special abilities, or by only using a specific ability. 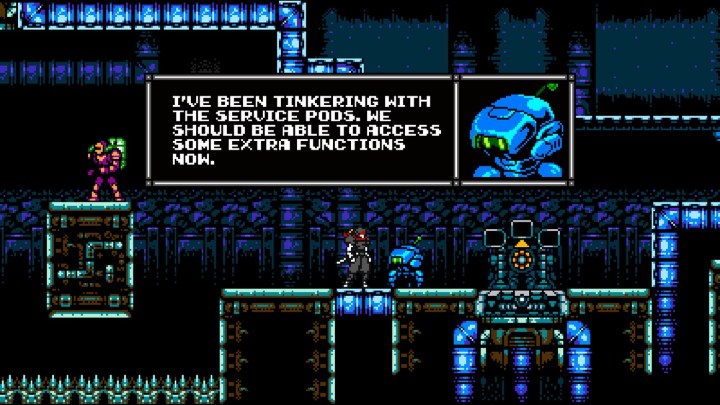 All in all, Cyber Shadow continues to up the ante over the course of the entire game, and just when you think the last hurdle was the toughest yet, a new, bigger one comes in your way, one that may seem nigh impossible at first. Yet, as I continued with persistence, I was able to gradually get over every obstacle in my path, including several of the super brutal optional routes, and every obstacle felt rather fair all things considered, with very little in the way of cheap hits or difficulty spikes. 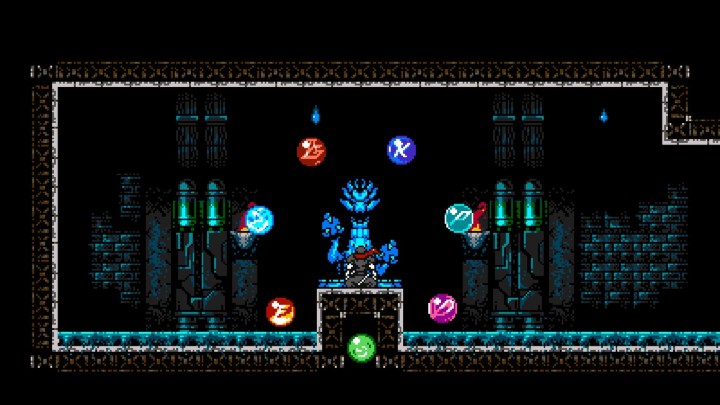 That being said, there is one concern, and that comes from the inconsistent length between checkpoints at times. While the game is still fair and these gaps are mostly doable, there are odd moments where the gaps between checkpoints can drag on for what feels like forever, meaning that a death right before the next one can be all the more infuriating. Thankfully, if you killed a boss or midboss and then die, they stay dead, so little things like that help prevent these odd bumps from feeling demotivating, even if I feel a little bit more balance tweaking could have been done. 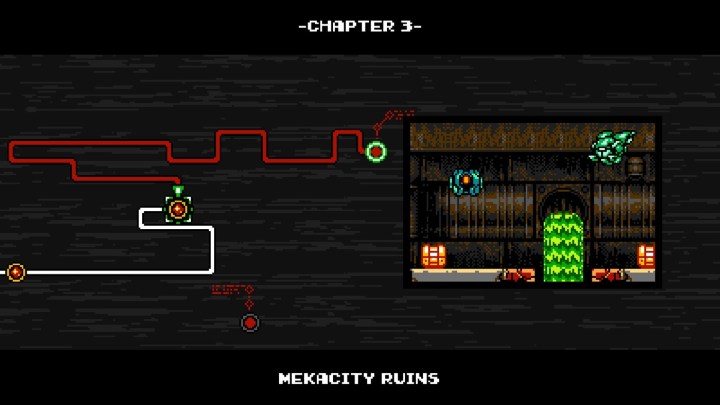 Still, at the end of the day, this platformer is a joy to behold, with each stage offering lots of satisfying, challenging action, and revisiting older stages once you are fully equipped can make you feel unstoppable. The controls are tight, the action is great, the flow feels almost perfect, this is just a sublime experience all around.

In conclusion, Cyber Shadow is just a tremendous joy to experience as a Shadow of the Ninja addict, but has a lot of merit that makes the game far exceed the inspirations that birthed it. The beautiful lack of lives, training the player to better themselves and master the game’s mechanics without causing pointless frustrations, the godlike music, containing a soundtrack you absolutely must buy the moment it becomes available, and the fun powerups, offering enough to make Shadow feel like a true evolving warrior.

When the only real fault I can think of with Cyber Shadow come from the occasional longer-than-expected gaps between checkpoints, this is a magnificent game that’s one of the best retro throwbacks I have played in my entire life. Combining the glorious stage-by-stage nature of a retro action game with tiny secret finding elements and in-game experience., and you have a very replayable game, whether it’s to try and 100% the game, or to speedrun and challenge yourself, this is a retro throwback that nails nearly everything in a beautiful manner, and one that I’m confident enough in saying that everyone should play as soon as possible.

It’s been a long road to release, but all that waiting was well worth it for this great moment, and fans of NES Ninja games need to own this tribute ASAP. The difficulty is a bit of a high mountain to climb, but it’s one of the most satisfying to reach the top of, and well worth challenging.