Thanks to ININ Games for the review code

In this compilation of four entries in the legendary Turrican series, you take control of the Turrican Warrior on his journey to defeat the evil machines seeking world domination! The stories are all fairly basic across the four games, though Turrican II is noteworthy for having a very, very long and detailed intro cutscene for the time. This is, in essence, also a sneak peak at the upcoming Turrican Anthology voluemes, planned for PS4/Switch via Strictly Limited, as those include extra versions and other games not included here.

Turrican Flashback is a retro compilation of four 16-bit Turrican games from across the ages: the first two on Amiga, and Mega and Super on those respective platforms. The games themselves still look very sharp and well detailed, with impressive colors and even some clever scaling in points. (especially in Super)

Yet, the biggest highlight of the entire package comes from the godly OSTs, which have no right to be as good as they are: the two Amiga games in particular have outstanding music, with the intro theme to II being a new huge favorite of mine. Mega Turrican is easily one of the best western-made OSTs on the whole Genesis system, and Super, while just being a weaker sounding version of Mega’s OST, is still rather decent, even if it’s the weakest OST of the four included. This is definitely a franchise known for its music for a good reason, and the remix that plays on the game selection menu is equally as great.

When it comes to the compilation itself, there is a cool CRT mode here, with customizable effects for your liking. You even have the option to change the color palette to completely unorthodox options, such as BW, and messing around with the screen to find a display of your choice. It’s pretty basic and doesn’t offer much besides customization of the screen and borders, meaning there’s no sort of museum of concept art or anything extra besides the games themselves.

You all know the usual norm with our compilation reviews: I break down the compilation bonuses and features in general, before going over each of the individual games. So what does Turrican Flashback have to offer as bonuses for the four games on offer here? Well, not too terribly much, but a good amount that add some benefits to these retro titles.

You have your standard save state feature, with multiple slots to save and load up at will, and a handy rewind feature, usable with the L button. (or whichever button you choose: you can even unmap it if you want) But besides the usual emulation stuff, you have an interesting control scheme that helps make these games feel more apt for modern controllers, with their extra buttons. For example, while the two Amiga games used keyboard controls with lots of functions mapped to certain buttons, said functions are comfortably mapped to the face and shoulder buttons, such as the beam, mines, and wave attacks, alongside the traditional jump and shoot.

Even Mega and Super get in on this new control scheme, with Mega mapping other features like the wheel and grapple moves to the shoulder buttons, and Super not using the traditional SNES layout, but rather changing it in favor of a more comfortable one fitting of the back triggers, mapping the beam and wheel attacks to the shoulder buttons. You can manually tweak these controls if you want them to be like the original console games, but I ended up vastly preferring these new control layouts, and they helped to give these games extra comfort. There’s even a handy cheats list for each game, and while it does warn you that enabling them will turn off trophies… There aren’t actually any trophies in the Switch version, so you can go nuts and abuse them to make the games as easy as you like.

Unfortunately, there’s not much else here besides the four games, the emulation features, and the upgraded controls: There’s a simple credits page and nothing in terms of a museum gallery, sound test, interviews, or anything of the sort, so the compilation aspect is very barebones here. So how are the four games that are the main selling points? Let’s break them up one by one, per tradition.

Turrican (Amiga): What started it all, except that’s only a half-truth: the original Turrican was on C64, and that version is not included here due to ownership reasons, with future ports being handled by Factor 5, who made the legendary 16-bit ports that are included here. This updated version includes better scrolling and visuals along with a godlike soundtrack from the composer behind Giana Sisters, and is a fairly average, yet fun sidescroller, where you guide the Turrican warrior to the end of each stage while defeating enemies with your wide array of weapons.

Not much special about this first outing otherwise, though the levels are fun and there’s even a neat change of pace with a jetpack stage midway through the adventure, and is a worthy first installment.

Turrican II: The Final Fight (Amiga): This is it, the magnum opus of this compilation: Taking everything that worked well from the original game and expanding it by a ton, Turrican II is the must-play of the compilation, adding a lot of fun exploration elements and secrets to the longer stages, and increasing the ante with challenging boss fights and the addition of side-scrolling shump stages. 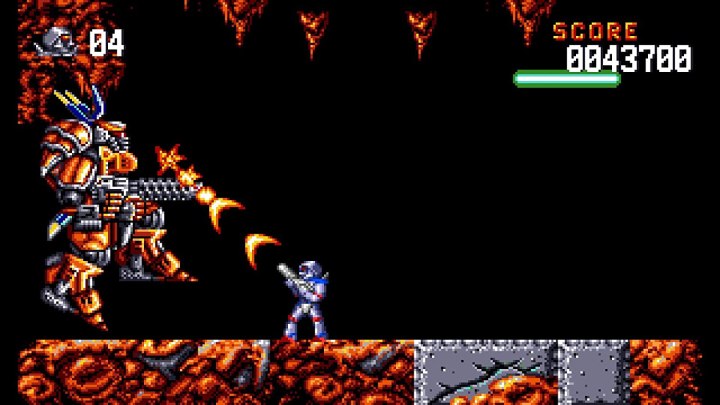 Everything here is lovingly crafted and well designed, and if there’s any game that make this compilation worth a buy, it’s easily this one game, well worth the praise and reputation it holds. Scorechasers, explorers, run’n’gun fans, this game will appeal to all kinds of players, and that’s what makes Turrican II so magical.

Mega Turrican (Genesis): The only one of the four I played prior to this compilation, this was originally published by Data East, and is technically the third installment in the series, although it released after Super Turrican due to development and manufacturing delays. Going away from the explorative nature of the second game and aiming more for an arcadey feel, Mega Turrican is still a very fun game, and a cool grappling hook move has been added to the mix, offering some fun platforming akin to Bionic Commando. 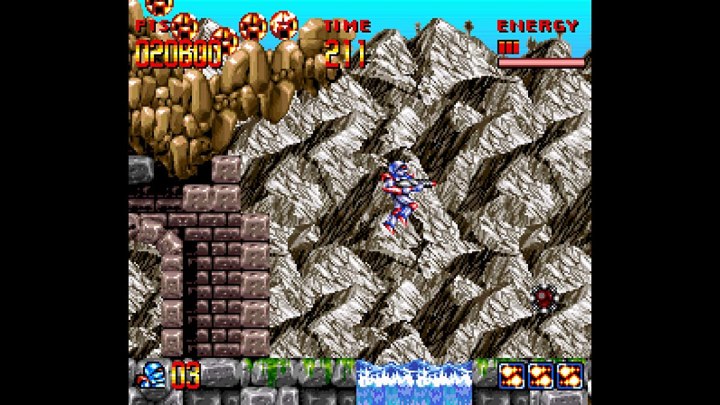 Still, the game isn’t as polished as the two Amiga games, but is still a very fun console outing, and uses the Mega Drive system in some clever ways, while still rocking that great audio the series is known for. This was later backported to Amiga as Turrican 3, though that version is not included here, but rather, the second volume of the Anthology.

Super Turrican (SNES): This is an odd one. A pseudo sequel/remix of Turrican I/II, Super Turrican is a decent outing, yet I felt this was the weakest of the collection for a variety of reasons. For starters, the level design is a mixed bag, offering some exploration, but a lot of it feels like poor padding and not nearly as well thought out as the other games. Second, the game itself just feels lesser in a lot of ways in general, with a big lack of polish.

That was actually pretty well known back in the day, too. The original game was meant to ship on a bigger cartridge, but had to be downsized at the request of the publisher. As a result, an entire stage and a bunch of QOL features were cut, and the game was shipped with a rushed feel to it. A version of the expanded game was available via the Super NT Mini, and that version is also to be included in the anthology, too, but this version on Flashback is the original SNES version, incompleteness and all, so you’ll have to experience the retail experience from 92 in this one. It’s a shame they didn’t include the director’s cut here, but for historical purposes, the game is still worth at least one playthrough.

In conclusion, Turrican Flashback is a great compilation of four spectacular action games, containing most of the major games in the franchise, save for Super Turrican NES and Super Turrican 2. The lack of the Directors Cut for Super is also a bummer, though I can at least understand them wanting to stick to the originals for this introduction course.

At the end of the day, you still have the two Amiga classics that started it all, and two great console followups. Having only been familiar with Mega Turrican beforehand, I was very impressed with the quality of all these games, and had an immensely fun time going through the two Amiga games in particular, while Mega Turrican is a pretty decent followup, and Super is an interesting, if rushed game.

With rewind functionality and a good amount of customization features on offer, this is a great intro to the Turrican series, even though I really wish there was some sort of in-game museum with concept art and the like to enjoy, or even better, a sound test for all four games available from the selection menu, rather than having to go into each game to find said test. With the lack of bonus features, it is rather tough to recommend this compilation at the $30 pricepoint, though, especially if you’re going the download route. But if you want to go retail, you could also just wait for the Strictly Limited volumes and get both of those for more games and features, making this a tough sell.

Still, whether you’re a Turrican newbie like me or a veteran fan, this is definitely a well-made compilation you do not want to miss out on, whether to hold you over for the bigger anthology collections, or just to see if you like the series before spending a bigger investment on the franchise. If this ends up as your only option, or if you find this on sale, then this is still a compilation of very good games worth picking up, and a good starter set for the Turrican series.

I give Turrican Flashback an 8 out of 10.