Thanks to Teamcoil for the review code

In this trippy survival game, you take control of a cat who sets out to save a world in peril… A very, very trippy world, with lots of strange allies coming to his aid to defeat a crazy satanic cult. Don’t be fooled by the trailer, for the game is far more trippy and crazy than you may believe, and I honestly even have to go as far as to say that this game isn’t friendly on eyes in the slightest, with no option to reduce any sort of visual risk whatsoever.

PUSS is all about the presentation, to the point it arguably takes too much focus away from the gameplay itself. Namely, the fact that this game is filled with random trippy backgrounds, level designs, and weird stuff in general meant to make you uncomfortable or confused. Some of these surprises are pretty funny and clever, while others are very unnerving.

Most are just irritating, and arguably make the levels they’re associated with worse to play, mainly because they get in the way of the gameplay with excessive flashing that has no reason to be as crazy as it is. I’m all for artistic freedom and going crazy with lights in retro games for the authenticity of it all, but this just feels waaaay too excessive for the heck of it, and the lack of any toggle to reduce the flashing is pretty disappointing to see, since the game can easily keep the shock value without having to resort to extreme measures that could harm players with sensitive eyesight.

The music is equally trippy, with tracks ranging from distorted noise and voices that are really darn creepy, to absolutely nonsensical songs that are very unfitting of the levels they associate: nothing is iPod worthy here, of course, but with the weird nature the game is going for, they get the job of an unsettling world down extraordinarily well.

PUSS is a game where the only control you have is moving, like that of a maze game. Both the left and right sticks are used for movement, and you can increase your speed by using both sticks at once. The goal of each stage is very simple, just move to the exit without hitting obstacles or the border for too long, or else the world will glitch apart and you’ll be sent to the last checkpoint. Each world consists of stages shuffled in a random order, meaning that each attempt of the world will have different stages in different orders: Sometimes it may be a smooth ride, and sometimes the difficulty can be jacked up to absurd amounts due to a tough stage with slim platforms being thrown in.

Each world does have its own pool of stages, so you won’t be getting a late-game stage in World 1, but that doesn’t mean the stages aren’t absurdly tough, mainly due to some of them relying on putting up a bunch of visuals to distract the player, usually to the point of absurdity. This means that unfortunately, the level designs aren’t exactly well-made, leading to a very inconsistent difficulty curve. 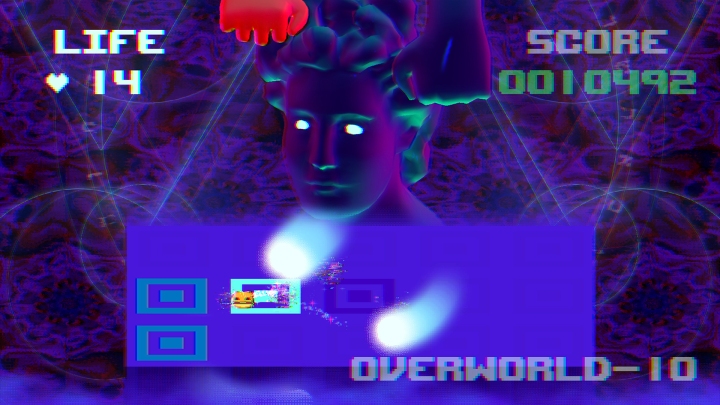 Luckily, you can gain extra lives pretty easily if you clear stages quickly, making the worlds pretty short if you get a good set of levels and clear them quickly, but otherwise the game is just too crazy and has little sense of balance whatsoever. 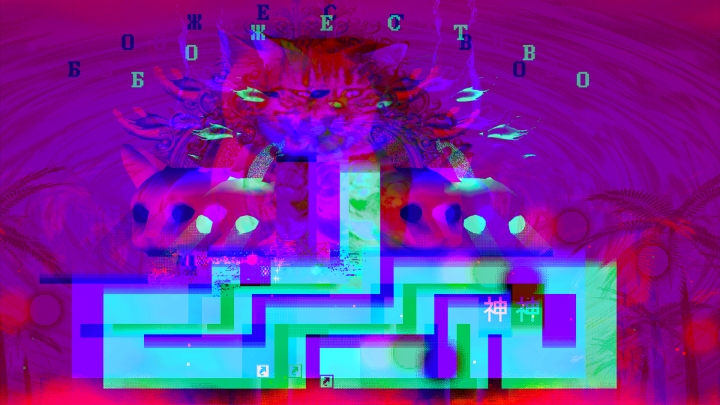 That being said, the best part of PUSS by far is the boss battles. While they can still get excessively trippy, these are very well designed, and each add a clever twist on the formula to throw in new mechanics: whether it’s powering up for a first person battle, a crazy bullet hell fight, to even a shooting stage, PUSS’s bosses are incredibly creative and fun, and I really wish the rest of the game was as well designed and clever as some of these fights. But overall, PUSS is just really inconsistent, not that fun to play in general, and way too flashy for it’s own good. Yet, moments like the bosses are enough to make me smile regardless.

PUSS was a game abruptly dropped into my email inbox with little notice, one that caught me off guard and I normally would ignore due to my break. Yet, willing to take on a challenge, I gave it a spin, and it’s honestly pretty mediocre at the end of the day, with weird execution and more of a focus on shock value rather than thoughtful level design.

The inconsistent difficulty and excessive visual effects just don’t lead to a good game, and really I can’t recommend this game at all, especially for the crazy $13 price. Literally the only reason this game would be worth checking out is due to the trippy shock value aspects, and only if you’re a hardcore fan of that stuff willing to look over the clunky maze gameplay surrounding this one strange adventure.