Thanks to TheArcadeCrew for the review code

In this metroidvania adventure, you take control of a reactivated robot named Tabby, who goes on a quest for revenge and freedom, using the power of two special Kunai to navigate the world and fight in a resistance against the evil Lemonkus!

KUNAI is presented in an interesting art-style, one that seems to mesh comic-like and monochromatic shading together for a strange, yet comfortable look and feel, where the only primary colors are that of your main character, certain attacks, and certain enemies, making them incredibly distinct and effective. The best part of this by far comes from certain cutscenes, where the art really shines in beautifully animated moments that pack this world with plenty of style.

The sound front is tolerable, with satisfying sound effects for combat and your kunai, and a soundtrack that gets the job done, even if it comes off as ambient. The dialogue noises fit the mechanical nature of the world’s characters, and even enemy noises are nice and metallic, truly fitting in with the robotic feel of this world.

Kunai starts off rather slow, guiding you through a boring and pretty simplistic factory as you’re shown the ropes of each and every mechanic, from movement, combat, and eventually, using your Kunai to move. Once you find everything in the first area and defeat the first boss, the game finally opens up enough to let you explore, although the game still is a semi-linear adventure with set goals at the end of the day, even with plenty of treasure to find.

Tabby can jump, attack with a multi-hit slash, and use the shoulder buttons to shoot out one of two Kunai. Once these Kunai hook onto a surface, whether it’s a ceiling, wall, or even an object, you can fiddle around with jumping or timing with the buttons and launch Tabby accordingly. At first, this can feel pretty clunky and hard to adapt too, especially if you try using this on enemies to no success. Yet, once you get the hang of the kunai physics and feel the “pull” they offer, the game flows together like butter, leading to an oddly satisfying main mechanic that brings to mind Bionic Commando, only with a jump button and melee combat.

Of course, that isn’t all Tabby has access to, for each area they explore will offer new tools and items to mess with, along with being able to find upgrades, secret rooms, and alternate routes, in pure metroidvania fashion, so there’s still a very big incentive and fun satisfaction in going out of your way to see which area you can open up next with your abilities. Along the way, you’ll also be defeating a lot of enemies and gaining coins dropped from them, which can then be used to buy upgrades for Tabby via a shop. However, the shop is only available via a Wifi connection, meaning you’ll have to guide Tabby to compatible hotspots in order to spend on the upgrades. Still, these are definitely worth buying, for they include handy features such as a charged attack, a pull maneuver, an auto health refill, among other things, so it does give meaning to those coin-filled chests hidden around the game world. 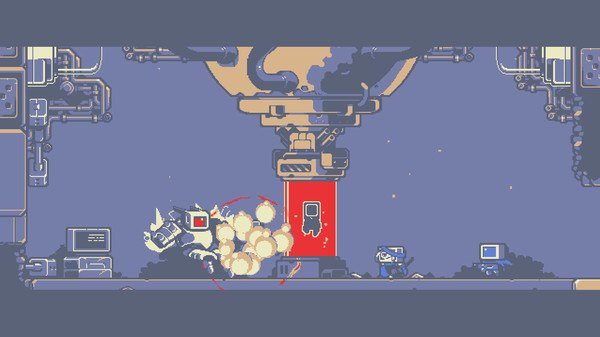 Overall, exploration is pretty enjoyable in Kunai, and you can zip around like no tomorrow once you adjust to the Kunai mechanic, chaining from Kunai jumps to bouncing off enemies with a carefully timed downward attacks just leads to a joyful experience, and finding treasure and hidden pathways is enjoyable too. However, this game can get rather tough, but not in a bad way!

While death will send Tabby back to the last checkpoint, he’ll still keep all his general progress, meaning that you just simply have to backtrack to where you died and continue onwards. However, I did feel that some checkpoint gaps were rather distant, which did lead to pretty irritating moments when it came to dying and having to redo a long platforming section all over again, especially when said sections may include instant death hazards like pits or autoscrolling. Yes, dreaded autoscrolling moments in a metroidvania. Thankfully they aren’t that common, but I’m baffled as to why they’d be here.

In conclusion, Kunai is a fun metroidvania, with a concept that, while not lighting the world on fire, was one that I found fun to play and experiment with. Combat was rather satisfying, and it hit all the basic notes that I enjoyed from a metroidvania, with lots of optional goodies to find.

However, while the Kunai do add a lot of depth to your movement, I didn’t really find much else that made this game stick out, and the lackluster checkpoints do make certain parts more frustrating than they need to be. Still, if you love the genre, KUNAI is still worth a playthrough.